The Total SMARCA2 kit is designed to quantify the expression level of SMARCA2 in cells.

The SMARCA subgroup of genes belongs to the SWI/SNF family, involved in chromatin remodeling and DNA damage repair. SWI/SNF complexes regulate the genes involved in essential processes such as DNA replication, damage repair, and cell proliferation.

SMARCA4 loss of function is frequently associated with cancer, and a synthetic lethal relationship between SMARCA4 and SMARCA2 is well established in SMARCA4-deficient cancers, where the inactivation of SMARCA2 leads to tumor cell death.

Among therapeutic strategies being investigated to fight cancers, targeted protein degradation is expected to overcome some limitations from conventional small molecules. So far, PROTAC molecules have been developed to induce the selective degradation of SMARCA proteins. However, SMARCA2 and SMARCA4 share about 75% identity at the protein level, and so compounds are likely to target both proteins. Therefore, the selectivity of compounds targeting either SMARCA2 or SMARCA4 must be carefully investigated. In such investigations, the HTRF total SMARCA4 kit is a valuable companion assay for the HTRF total SMARCA2 kit, enabling reliable compound profiling.

The HTRF Total-SMARCA2 assay quantifies the expression level of SMARCA2 in a cell lysate. Unlike Western Blot, the assay is entirely plate-based and does not require gels, electrophoresis, or transfer. The Total-SMARCA2 assay uses two labeled antibodies: one coupled to a donor fluorophore, the other to an acceptor. Both antibodies are highly specific for a distinct epitope on the protein. In presence of SMARCA2 in a cell extract, the addition of these conjugates brings the donor fluorophore into close proximity with the acceptor, and thereby generates a FRET signal. Its intensity is directly proportional to the concentration of the protein present in the sample, and provides a means of assessing the protein’s expression under a no-wash assay format

The two-plate protocol involves culturing cells in a 96-well plate before lysis, then transferring lysates into a 384-well low volume detection plate before the addition of Total-SMARCA2 HTRF detection reagents. This protocol enables the cells' viability and confluence to be monitored.

Detection of Total-SMARCA2 with HTRF reagents can be performed in a single plate used for culturing, stimulation, and lysis. No washing steps are required. This HTS designed protocol enables miniaturization while maintaining robust HTRF quality.

The different cell lines were plated in 96-well culture plates at a density of 200,000 cells/well and incubated for 24 hours at 37°C, 5% CO2. After culture medium removal, the cells were lysed with 50 µL of supplemented lysis buffer #1 (1X) for 30 min at RT under gentle shaking. Then 16 µL of cell lysate were transferred into a low volume white microplate, followed by 4 µL of premixed detection reagents. The HTRF signal was recorded after an overnight incubation at RT.

Furthermore, the expression levels of SMARCA2 in HAP1 cells were equivalent to the non-specific signal (dotted line), indicating a lack of expression of SMARCA2, whereas SMARCA4 levels were well detected in the HAP1, as expected.

These results demonstrate the specificity of the HTRF SMARCA2 kit over SMARCA4, despite these two proteins sharing more than 70% sequence homology.

The SMARCA2 expression level was assessed with the HTRF Total SMARCA2 kit. Briefly, 16 µL of cell lysate were transferred into a low volume white microplate followed by 4 µL of premixed HTRF detection reagents. The HTRF signal was recorded after an overnight incubation at RT. The dotted line corresponds to the non-specific HTRF signal. Note that the cell density was optimized beforehand to ensure HTRF detection within the dynamic range of the kit (data not shown).

HEL92.1.7 cells were seeded in a 96-well plate (100,000 cells/30µL well) and treated with increasing concentrations of  PROTAC® compounds ACBI1 and AU-15330, as well as a PROTAC ARV-471 (PROTAC® Estrogen Receptor) used as a negative irrelevant control. After overnight incubation, cells were lysed with 10 µl of supplemented lysis buffer #1 (4X) for 30 min at RT under gentle shaking. After cell lysis, 16 µL of lysates were transferred into a 384-well low volume white microplate and 4 µL of the HTRF total SMARCA2 detection antibodies were added. The HTRF signal was recorded after an overnight incubation.

Cell treatment with the two SMARCA2 PROTAC® degraders triggered a dose-dependent decrease in SMARCA2 protein, while the expression levels of SMARCA2 in the ARV-471 control conditions as well as the ATP levels remained stable. These results suggest a PROTAC® induced specific SMARCA2 degradation, with a DC50* in the nM range, as  expected (Farnabay, W. et al. Nat Chem Biol. 2019 and Xiao, L. et al. Nature 2022).

* DC50  corresponds to the concentration of the degrader at which 50% of the targeted protein is degraded.

HEL92.1.7 cells were seeded in a 96-well plate (100,000 cells/ 30µL well) and treated with increasing concentrations of  PROTAC® compounds ACBI1 and AU-15330. After overnight incubation, cells were lysed with 10 µl of supplemented lysis buffer #1 (4X) for 30 min at RT under gentle shaking. After cell lysis, 16 µL of lysates were transferred into a 384-well low volume white microplate and 4 µL of the HTRF detection antibodies were added, using Total SMARCA2 or Total SMARCA4 assay reagents. The HTRF signal was recorded after an overnight incubation

HEL92.1.7 cells were cultured in a T175 flask in complete culture medium at 37°C, 5% CO2. After a 24h incubation followed by cell medium removal, the cells were lysed with 3 mL of supplemented lysis buffer #1 (1X) for 30 minutes at RT under gentle shaking.

Serial dilutions of the cell lysate were performed using supplemented lysis buffer#1, and 16 µL of each dilution were transferred into a low volume white microplate before the addition of 4 µL of HTRF total SMARCA2 detection reagents.

Equal amounts of lysates were used for a side-by-side comparison between HTRF and Western Blot.

In these conditions, the HTRF total SMARCA2 assay was as sensitive as the Western Blot technique. 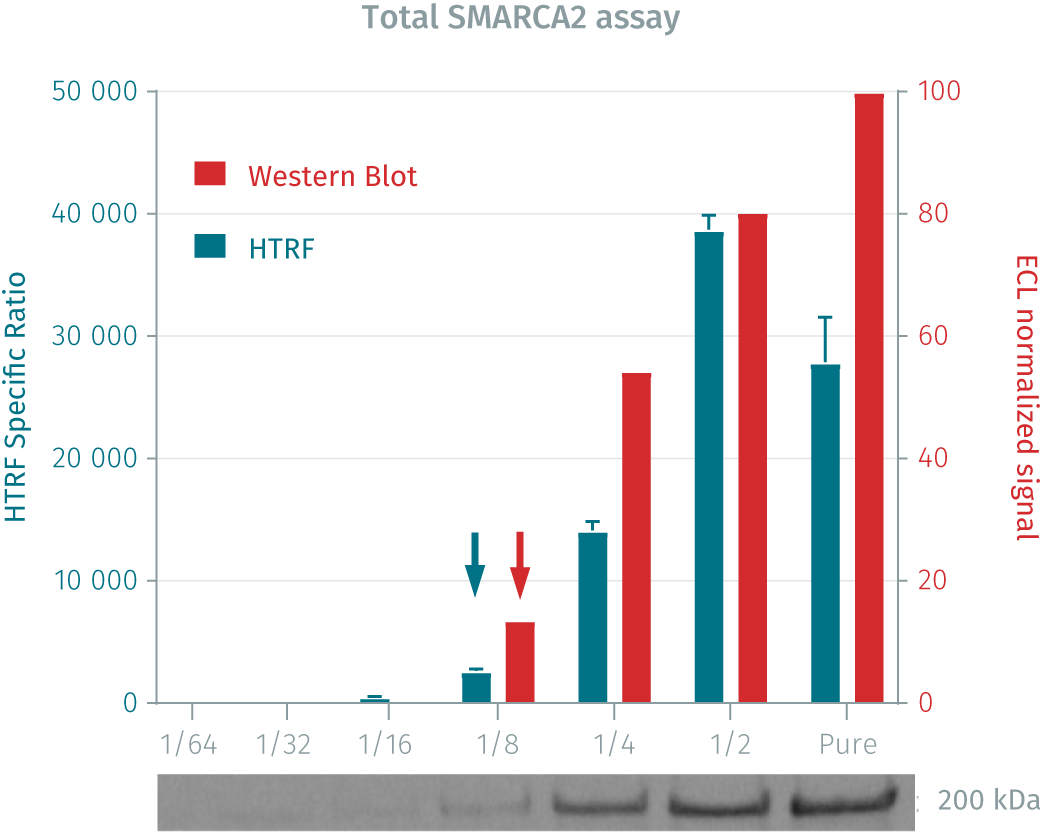 SMARCA2 and SMARCA4 are catalytic subunits within the SWI/SNF complex involved in DNA transcription and repair. SMARCA2 and SMARCA4 comprise 6 different domains, including a DNA-dependent ATPase domain and a Bromo domain. The Bromo domain and H3K27 acetylated levels regulate the binding between DNA and the SWI/SNF complex, while the ATPase domain catalyzes the separation of the two DNA strands. These functions are counteracted by the EZH2 catalytic subunit of the PRC2 complex repressing gene transcription. The loss of function of SMARCA2 or SMARCA4 leads to increased DNA damage, as PRC2 continues to bind to the nucleosome and inhibit DNA repair. 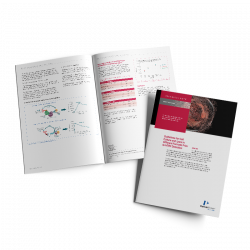 Guidelines for Cell Culture and Lysis in Different Formats P... 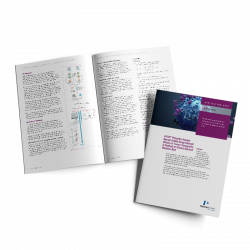