The Total-FGFR3 kit monitors the cellular FGFR3 expression level, and can be used as a normalization assay for the phospho-FGFR3 kit.

The Total-FGFR3 cellular assay monitors total FGFR3, and can be used as a normalization assay with the phospho-FGFR3 kit. Mutations in FGFR3 have been associated with a wide variety of cancers, such as bladder, colon, or melanoma cancers.

The Total-FGFR3 assay quantifies the expression level of FGFR3 in a cell lysate. Unlike Western Blot, the assay is entirely plate-based and does not require gels, electrophoresis, or transfer. The Total-FGFR3 assay uses two labeled antibodies: one coupled to a donor fluorophore, the other to an acceptor. Both antibodies are highly specific for a distinct epitope on the protein. In presence of FGFR3 in a cell extract, the addition of these conjugates brings the donor fluorophore into close proximity with the acceptor, and thereby generates a FRET signal. Its intensity is directly proportional to the concentration of the protein present in the sample, and provides a means of assessing the protein’s expression under a no-wash assay format.

The 2 plate protocol involves culturing cells in a 96-well plate before lysis, then transferring lysates to a 384-well low volume detection plate before the addition of Total-FGFR3 HTRF detection reagents. This protocol enables the cells' viability and confluence to be monitored.

Detection of total FGFR3 with HTRF reagents can be performed in a single plate used for culturing, stimulation, and lysis. No washing steps are required. This HTS-designed protocol enables miniaturization while maintaining robust HTRF quality.

Different human cancer cell lines were seeded in T175 flasks in complete culture medium at 37°C-5% CO2. The cells were then lysed with 3 mL of supplemented lysis buffer #4 (1X) for 30 minutes at RT under gentle shaking.

25 µg  of total protein for each cell line and 15 µg for the KG-1 cell line were analyzed for their total FGFR1-2-3 and -4 protein levels. 16 µL of normalized samples were transferred into a 384 well low volume white microplate and 4 µL of each HTRF Total FGFR1-FGFR2-FGFR3 or FGFR4 detection antibodies were added. The HTRF signal was recorded after an overnight incubation. The results reveal a differential expression pattern for the four different FGFR receptors. Whereas FGFR1 is expressed at high level in the DMS114 cell lung cancer model and the KG-1 bone marrow myelogenous leukaemia model, FGFR2 is preferentially expressed in SNU-16 and Kato-III gastric cancer model, FGFR3 in the KMS-11 multiple myeloma cell line, and FGFR4 in the MDA-MD-453 breast cancer model or HuH7 hepatocarcinoma cell line. Moreover, these results demonstrate the recognition specificity provided by the HTRF Total-FGFR kits.

After cell lysis, 16 µL of lysate were transferred into a 384-well sv white microplate and 4 µL of the HTRF phospho-FGFR3 (Tyr647/648) or Total-FGFR3 detection reagents were added. The HTRF signal was recorded after an overnight incubation at room temperature.

As expected, results obtained show a dose-response inhibition of FGFR1 Y647/648 phosphorylation upon treatment with AZD4547, while the FGFR3 expression level remains constant.

Serial dilutions of the cell lysate were performed using supplemented lysis buffer, and 16 µL of each dilution were transferred into a low volume white microplate before the addition of 4 µL of HTRF Total-FGFR3 detection reagents. Equal amounts of lysates were used for a side by side comparison between HTRF and Western Blot.

A side by side comparison of Western Blot and HTRF demonstrates that the HTRF assay is 125-fold more sensitive than the Western Blot, at least under these experimental conditions.

FGFRs are tyrosine kinase receptors activated by the binding of FGF ligands. This binding drives receptor homodimerization, leading to the activation of the FGFR tyrosine kinase domain, and specific tyrosine residue phosphorylation. The activated receptor is a docking site for a variety of proteins that induce downstream activation of several signal transduction cascades, including the RAS-MAPK, PI3K-AKT, PLCγ, and STAT pathways.

FRS2α is a key adaptor protein constitutively associated with FGFRs. The activated FGFR phosphorylates FRS2, allowing the recruitment of GRB2 and SOS to activate RAS and the downstream RAF and MAPK pathways, particularly ERK1/2. Via GAB1, GRB2 also activates PI3K, which then phosphorylates AKT. Independently of FRS2, the binding of PLCg to the intracellular part of the activated FGFR leads to the production of IP3 and DAG by the hydrolysis of PIP2. DAG activates the enzyme PKC, which partly reinforces the activation of the MAPK pathway. Other pathways are also activated by FGFRs depending on the cellular context, such as STAT signaling.

The signals transmitted from the FGFRs to the nucleus lead to the regulation of various biological functions such as cell proliferation, differentiation, survival, adhesion, migration, and angiogenesis. Alterations of FGFRs in a wide variety of cancers are associated with the overexpression or hyperactivity of FGFRs, making the receptors key targets for anti-cancer therapies.

The knowledge and data necessary to understand the inhibition value of FGFR receptors involved in human cancers. HTRF technology enables the monitoring of the activity of the AZD4547 inhibitor on cell signal transduction in 3 cancer cell lines. - Application Notes 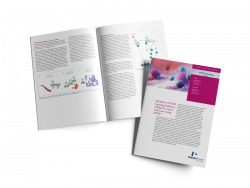